November 10th, 2021 – SEKOIA.IO’s Cyber Threat Intelligence team had an in-depth look at  the APT31 intrusion set at the beginning of 2021 when the BfV (Bundesamt für Verfassungsschutz)¹ and McAfee² released some new information. A few months later, the French National Cybersecurity Agency (ANSSI) also released a short publication with several IoCs³, showing that the intrusion set was still active and of concern as multiple national agencies had been involved.

All of these IoCs were mainly IP addresses, and many of them seemed to be linked to SOHO routers, mostly Pakedge routers at the time. With that observation, we investigated more deeply to see if we could find more infrastructure and implants used by this intrusion set.

A brief on the APT31 creature

APT31 (aka Zirconium or Judgment Panda) is an Advanced Persistent Threat group whose mission is likely to gather intelligence on behalf of the Chinese government. Similar to other nation-state actors, the group is focusing on data of interest to the PRC (People’s Republic of China) and its strategic and geopolitical ambitions, rather than on specific verticals.

The Chinese adversaries are considered some of the most prolific state-sponsored cyber actors on the planet. According to Microsoft’s observations, from July 2020 to June 2021, China-based threat actors displayed the strongest interest in targeting critical infrastructure among all the other nation-state threats⁴.

Figure 1. A timeline of the publicly reported APT31-related campaigns

As shown in Figure 1 and in alignment with available public reports, APT31 has been active since at least 2013 and its 2021 campaign targeting numerous French entities is still ongoing.

Even if the public literature on this intrusion set is quite limited, APT31 is known to use — among others vectors — spear phishing to get a foothold in the victims’ networks. Although their recent campaigns weren’t technically sophisticated, they succeeded in bypassing network defences by employing only legitimate websites and services to host their implants (GitHub) and interact with them once executed on the victims’ workstation (use of DropBoxAPI)⁵. It has also been spotted targeting organizations via SQL injection attacks, as well as leveraging stolen credentials to gain initial access.

APT31 and other Chinese state–backed actors have been lately the object of several European governments’ attribution statements. Back in July 2021, the UK accused the Chinese Ministry of State Security (MSS) of supporting the APT31 group’s activities⁶. At nearly the same time, the EU detected malicious cyber activities with significant effects that targeted key European industries and linked them to APT31⁷. In both cases, official statements mentioned APT31 alongside another Chinese attacker group — APT40.

Moreover, authorities suspect APT31 to be a group of contractors working directly for China’s MSS, or even members of the People’s Liberation Army (PLA) Strategic Support Force, as reported by other sources.

Hunting in the APT31 infrastructure footprints

APT31 is one of the few intrusion sets known to have been seen compromising SOHO routers to compose its operational infrastructure, since at least November 2019, date on which a sample of the backdoor used on compromised routers was uploaded to VirusTotal for analysis (MD5: 77c73b8b1846652307862dd66ec09ebf). However, this implant can be much older as there is no compilation date associated with ELF files.

The Operational Relay Boxes (ORB) associated with this infrastructure are used as proxies for frontal attacks, active and passive reconnaissance and also as command and control servers for several implants. Till today, we don’t know how they compromised these routers. It is likely that they used a mix of known and unknown vulnerabilities to achieve remote code execution in order to drop their implants and other redirector tools.

We found ways and heuristics to illuminate some parts of their infrastructure and track it over time. The C2 domains used by this intrusion set have several characteristics such as:

As the domains were resolving to SOHO routers, it was also possible to track them using this particularity. Indeed, it is relatively rare that a domain from these DNS providers points to some domestic autonomous systems.

On the other hand, the network appliances compromised by APT31 have technical characteristics (eg. administration panels, specific certificates or banners) allowing anybody to recover thousands of IP addresses using them. By using passive DNS resolutions on these IP addresses, it was possible to discover new C2s when an observed FQDN pointing to them had the previously mentioned characteristics.

Finally, we discovered nearly 50 IP addresses and 34 domain names following ANSSI’s publication, with an overlap of one IP address resolved by the domain www.fwcheck[.]com. The table below summarises the brands of network appliances that composed the C2 infrastructure used by APT31 until July 2021. The confidence value depends on the number of heuristics (explained above) that matched as well as on whether other sources already mentionned the C2 or not.

Since July 2021, we have observed a shift in their infrastructure. They left their historical “Pakedge infrastructure” and moved it to new clusters composed this time of several other brands and nameservers in order to avoid infrastructure illumination by analysts.

Since then, it has become more difficult to follow their tracks although we can still see several new C2s such as neccloud[.]net — resolving to 5.252.176[.]102, a server under the MivoCloud umbrella — or netgearcloud[.]net, resolving to a domestic IP address based in Sweden on September 22, 2021. We link these domains to APT31 with high confidence as they match most of the infrastructure heuristics established during the investigation.

However, it’s worth noting that not all their Operational Relay Boxes are resolved by domains names. Thenceforth, the IoCs list provided at the end of this blogpost is obviously non-exhaustive and shows only a small fraction of their operational infrastructure used for attacks in 2021.

Implants seen during the walk

By looking at the implants connecting to this infrastructure in open source, we have been able to get several implants, that we assess were used by APT31 during their operations, such as Cobalt Strike beacons and an ELF implant dubbed “unifi-video” (MD5: 4640805c362b1e5bee5312514dd0ab2b), impersonating a well known IOT brand. 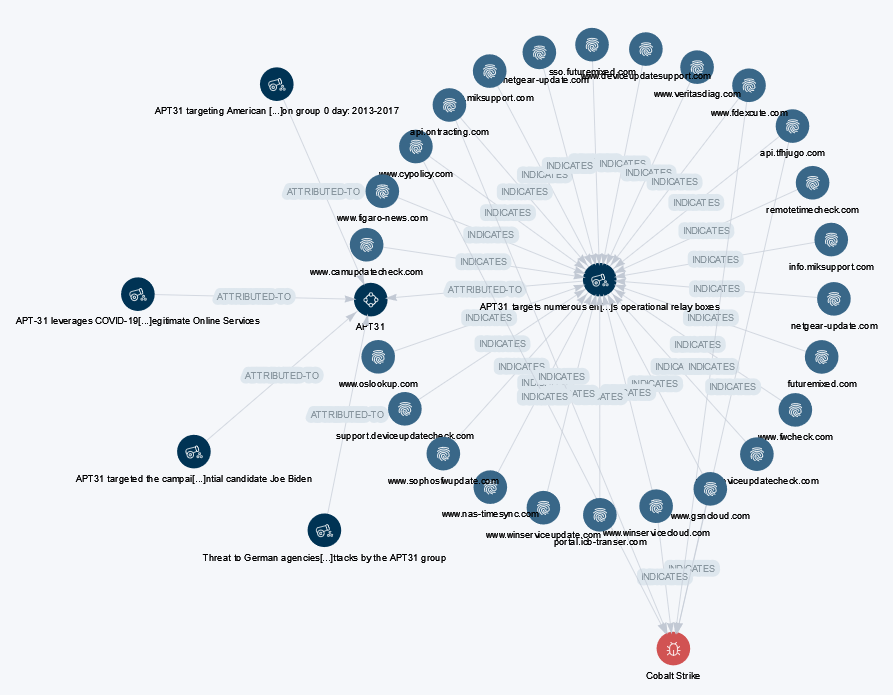 Figure 2. Links between some APT31 campaigns, indicators and malware/tools from SEKOIA.IO Intelligence Center.

Among standard red-teaming tools, APT31 seems to be using Cobalt Strike as an n-stage implant to persist inside the victim’s network. As shown in the table below, several beacons connecting to the “Pakedge infrastructure” have been sent to VirusTotal packed in a PE to VirusTotal. It is worth noting that as they have been packed in an executable file, the corresponding hash can’t be used to hunt for APT31 in your network.

Unfortunately, the configurations associated with the discovered Cobalt Strike beacons are pretty common and prevented us from getting more discriminant indicators linked to their use of Cobalt Strike.

During the hunting, we found an ELF implant on VirusTotal⁸ which matched the C2 —  hardcoded in the sample — www[.]moperfectstore[.]com. We attribute this domain with medium to high confidence to APT31 as it resolved to Pakedge and CyberOAM appliances and matches some domain heuristics described above. As the domain didn’t have any existence prior to 2021, we assess with medium to high confidence that the implant was used by APT31.

This implant, dubbed “unifi-video” (MD5: 4640805c362b1e5bee5312514dd0ab2b), is a statically-linked stripped 64bits ELF. Unifi-video is a well known legitimate software that describes itself as a “Centralized management system for Ubiquiti UniFi surveillance cameras”. It therefore echoes the compromised-appliance infrastructure used by APT31.

When analysing the file we noticed several routines overlapping with a known minimalistic Unix backdoor named Rekoobe which was covered previously by a few cybersecurity vendors such as Dr Web⁹ and Intezer¹⁰.

However, several questions remain unanswered regarding the real APT31 and Rekoobe connection.

First, we don’t know at the time of writing whether Rekoobe’s source code is shared between different threat actors or if Rekoobe has been operated by APT31 since it was first discovered in 2015. Moreover, if APT31 operated this sample of Rekoobe, there is no indication whether this implant is used in the infrastructure or to persist in an appliance of a final victim, somewhere.

ERRATUM (12/11/2021): While we initially thought that the implant (4640805c362b1e5bee5312514dd0ab2b) was linked to Rekoobe, the security researcher Billy Leonard pointed out on Twitter [Billy Leonard's tweet] that it was actually Tiny SHell [GitHub repo] which we definitely agree. Tiny SHell has been used by multiple threat actors since several years now and it is not surprising to see APT31 using it.

Despite the lack of open source literature on this intrusion set, APT31 remains a prolific threat for years for many occidental entities working on government and strategic issues. As of today, we don’t have a clear view of what they are looking for once they compromised the networks if it is for pre-positioning or data theft.

This blog post aimed to disclose some of their operational infrastructure and tools used this year so that you can look for possible compromises in your networks.

If you are also investigating APT31, don’t hesitate to share your thoughts with us at threatintel@sekoia.fr to better understand and track down their infrastructure.

⁷ China: Declaration by the High Representative on behalf of the European Union urging Chinese authorities to take action against malicious cyber activities undertaken from its territory

The IOCs are provided “as is”. Even if the domain names are a reliable way to hunt APT31 in your network logs, the IP addresses can produce false positives as they rely mostly on legit home routers. All the IOCs can be downloaded in JSON STIX2.1 and CSV formats on the SEKOIA.IO Github: https://github.com/SEKOIA-IO/Community/tree/main/IOCs

Chat with our team!

Would you like to know more about our solutions? Do you want to discover our XDR and CTI products? Do you have a cyber security project in your organization? Make an appointment and meet us!

Contactez-nous
We use cookies on our website to give you the most relevant experience by remembering your preferences and repeat visits. By clicking “Accept All”, you consent to the use of ALL the cookies. However, you may visit "Cookie Settings" to provide a controlled consent.
Cookie SettingsAccept AllReject All
Manage consent